It’s no pie in the sky

Kiwis and pies go hand in hand. In fact you could put an actual kiwi in a pie and get away with it because pies are more Kiwi  than kiwis.

There is nothing more quintessentially Kiwi than a pie.

I wasn’t even born when Neil took his giant leap for mankind or when John sucked the big kumara. But I can tell you where I was when I ate my first chicken pie.

What a milestone that was. Chicken and jelly in a pie, my God!

I was passing through Taupo, on my way to Wellington for a family event - I think it was a wedding. I wasn’t old enough to drive, but I was old enough to convince my sister to play my new Queen cassette.

I was certainly old enough to buy my own pie.

I must have been singing ‘He’s just a pie boy, from a pie family’ so loudly that the pie gods actually heard me.

One of my earliest memories is of my mother’s delicious bacon and egg slice, albeit with peas in it. I still do that but without the peas – seriously, peas in a pie? No, no, no, no, no.

I was almost certainly eating a steak and cheese at the precise moment Princess Diana died but I was far too distracted to grab my usual breakfast pie (bacon and egg of course) as I scurried into work on the morning of the twin tower attacks.

A few years later an optometrist actually spotted the pies in my eyes. He observed a thin halo of cholesterol around the irises and cheekily hinted that I might have been eating too many pies in my younger years. To which I replied ‘oh, yeah, nah, maybe a few’. I should have punched him. Too many pies, no such thing. Judgmental, skinny little man.

And it didn’t stop me buying my first Maketu pie at New World in Dunedin. It was the incredible, unbelievable and very daring Mussel Pie.

By this stage, a new kind of pie was the sort of thing I lived for, like a junkie looking for a new high. Seafood in a pie - that’s some seriously daring stuffing right there, I tell you.

The chopped mussels were entombed in a thick, creamy sauce and, thankfully, the  whole thing was heated to a perfect 75 degrees Celcius.

This is not the sort of pie you could take back to work and eat in the staff room. The lingering smell of seafood would have sparked accusations and finger pointing. Anyway, it was all gone by the time I got back into The Star building.

The unofficial pie capital of New Zealand is, of course, Tauranga - thanks largely, in recent times, to some very Kiwi, Cambodian bakers.

However, if you are serious about local pie history, then a short drive down the coast to Maketu Pies is required. They don’t call it the Bay of Plenty (of pies) for nothing.

So when the news broke this week that this little local company was in receivership it struck a blow to the heart of every serious pie connoisseur.

We simply must not lose this slice of pie history from our region.

I have no doubt at all that the brand will survive but anyone who has harboured romantic notions that Lemon & Paeroa comes out of a spring in the northern Waikato knows the kind of jarring disappointment that comes from shattered illusions.

I really hope Maketu is not snapped up by a faceless, multi-national, pie conglomeration.

My greatest hope for all of this is that the local workers get to keep their local jobs and maybe they could even open a little shop out the front so you can buy a pie straight from the source. Put themselves squarely on the pie pilgrimage trail.

In fact, why not go the whole hog. It’s high time we elevated the pie to a new level. I’m talking pie factory tours, pie paraphernalia, and an annual pie festival, including a hot air balloon shaped like a pie in the sky.

The Bay of Plenty has a golden opportunity to position itself as the pie capital of the world, and in the best traditions of community journalism, I’m going to put this grand idea out there for someone else to follow up before I get side tracked by another big issue.

Wrap your laughing gear around that! 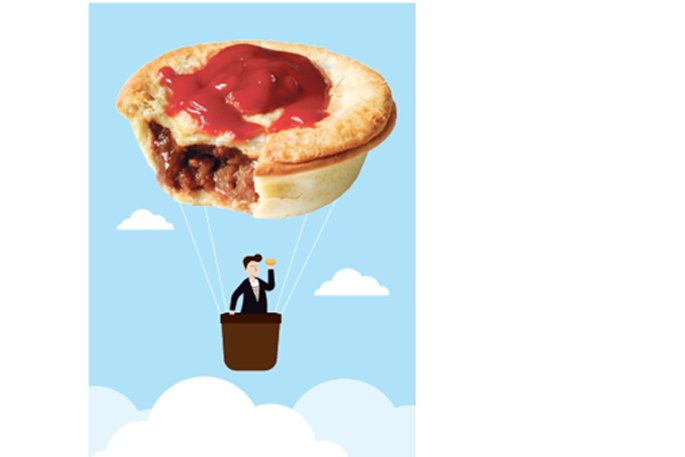