Big lows moving in will be tough on newborn lambs

WeatherWatch reports that for the next three days, low pressure systems will approach and pass across NZ.

After this weekend a cold blast, with Antarctic connections will spread north. The bulk of this energy will be just to our east but it will drop temperatures in many regions, drive in big swells to Cook Strait and bring another dusting of snow into the South Island.

Wind chill at times over the next few days will be tough on newborn lambs and calves.

Isolated thunderstorms are possible in several areas of the coastal North Island until Monday.

As WeatherWatch said several days ago, this cold change next week won't be so big in the north. For example Wellington, which will be around 14 degrees on Sunday, will drop to 10 degrees on Wednesday.

It's unlikely to be cold enough to bring snow to the Desert Road to any serious level at this stage, although overnight it may be more possible.

Auckland goes from warmer than average highs of 17 today to around 14 or even 13 next week.

On Tuesday Queenstown Airport and some South Island Alpine passes may have some brief snow as southern NZ is clipped by the polar southerly.

Large swells will also build on Wednesday around Cook Strait and may affect some ferry services, but not yet locked in. 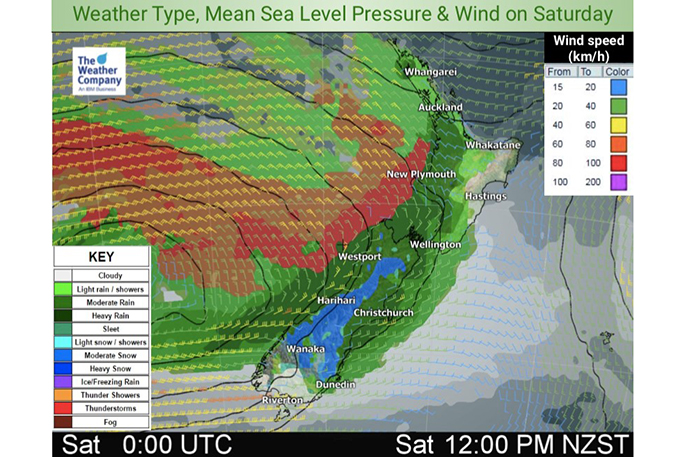