MetService is forecasting a deep low to pass to the south of Aotearoa over the weekend which is pushing a westerly wind flow onto the country from Sunday.

A front with strong northwest winds extends from the low and moves swiftly up the South Island reaching the North Island at dusk.

“MetService forecasters are expecting severe gales ahead of the Sunday front,” says Head of Weather Communication, Lisa Murray, “and are advising people to keep up to date with the latest forecast and warnings.”

“Many New Zealanders and tourists are traveling or enjoying the outdoors this month, so it is important to get the weather message to them, especially those in the far south of South Island, the South Island High Country and eastern areas of both Islands.”

The WeatherWatch Forecast Team also forecast that a southwesterly airflow will lie over New Zealand today, easing later on and overnight as a ridge pushes in from the Tasman Sea. It will be mostly sunny for the Waikato and Bay of Plenty with some high cloud.

MetService advise that as well as many parts of the South Island, Wairarapa and Hawkes Bay south of Napier can expect a period of severe gales. Rain is mostly contained to the west coast of the South Island which is likely to receive a brief heavy burst. 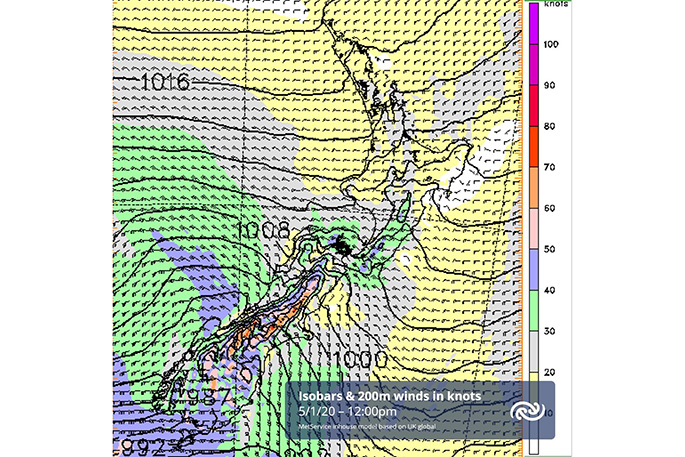 This wind direction will see more smoke particles from the huge bushfires in Australia reaching our shores, although the atmospheric set up is less conducive than it was on December 31 when skies in parts of the country turned a yellow haze.

Following the passing of the front, a strong west to southwest wind covers the south coast of the South Island from late Sunday, with severe gales possible.

The WeatherWatch team say that the temperatures today will be cooler than a normal day for most although much of the upper North Island is fairly average, with only a touch below average in the west. The coldest day time highs will be around Southland with 12 to 13 degrees likely, the warmest spot will be eastern Bay Of Plenty getting into the mid-twenties.

Keep up to date with the latest weather forecasts at metservice.com and weatherwatch.co.nz or download the MetService App which has all the latest Warnings. You can also follow updates on MetService TV, and at @MetService and @WeatherWatch.co.nz on Facebook and Twitter.