A ridge of high pressure has been responsible for warm, settled weather for much of the country this weekend, says MetService meteorologist Ciaran Doolin.

“The ridge is expected to stick around until the middle of the week before a series of fronts move up the country.

“Saturday was a warm day for many areas. Pukaki achieved the national high temperature at 30 degrees. Today, Pukaki is again forecast to reach 30 degrees, but this time the North Island might give the south a run for its money, with Te Kuiti also expected to reach 30.

“The ridge should bring fine weather to the northern and central North Island and inland South Island until mid-week. Elsewhere, areas of cloud are forecast,” says Ciaran.

On Wednesday, a front moves over the South Island, bringing a period of rain to many places. The front weakens and moves onto the North Island on Thursday, bringing showers to western areas. 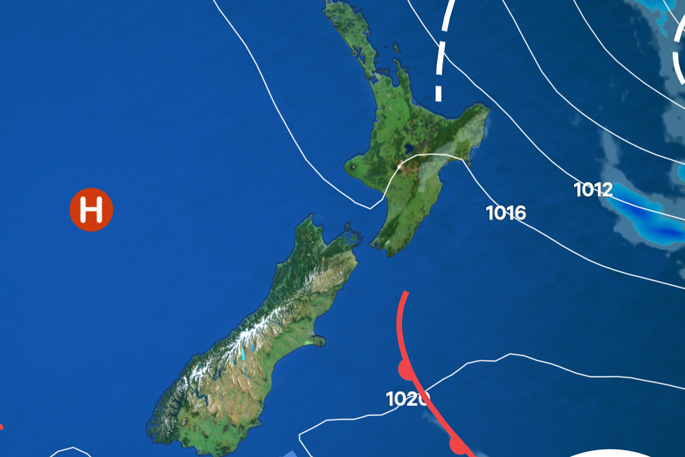 On Friday, another front moves up the South Island bringing further rain, with some heavy falls, particularly in western areas.

“MetService meteorologists have been monitoring Tropical Cyclone Tino, which has affected Fiji and Tonga. This morning Tino was located about 520km southeast of Nuku’alofa, Tonga, moving southeast,” says Ciaran.

“The system is expected to move out of the tropics this afternoon – after which MetService will assume responsibility for the system.

“Tino is expected to transition to an ex-tropical system tomorrow. No significant weather impacts associated with this system are expected for New Zealand as it is forecast to track well to the east of the country.”