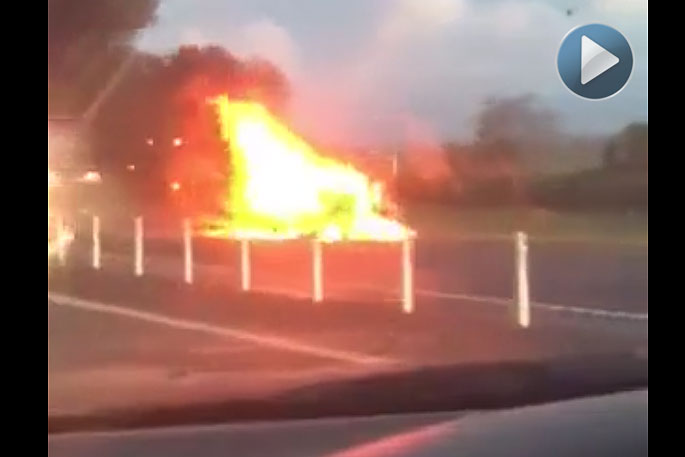 The moment a truck caught fire and exploded on Tauranga Eastern Link has been captured on camera.

The video was shared to SunLive on Tuesday night, moments after the truck had been seen engulfed in flames.

In the video the truck is seen to be well-ablaze in the westbound lane of State Highway 2/TEL, about 200m from the Kaituna River Bridge.

As the motorist passes, black smoke is seen rising into the air and an explosion is heard.

The fire was reported to emergency services just after 5.07pm.

He says the westbound lane of the motorway was closed for some time as a result of the fire, with eastbound traffic also facing some delays when emergency services arrived.

A motorist who passed the scene at about 6.45pm on Tuesday says police and fire were still in attendance.

“The truck looked as though it was being lifted onto a tow truck. It was completely black and there wasn’t much left of it.

“Cordons were also in place at the end of TEL with traffic being diverted through the Te Puke Highway.”

Burn marks and debris have also been spotted by some motorists this morning, where the fire took place.