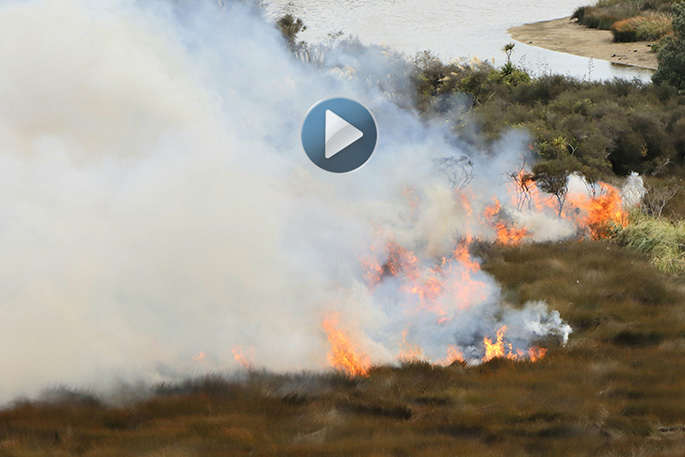 Angela was at home in Windermere on Friday when the vegetation fire broke out in the nearby reserve. She was one of the first to call emergency services.

“The fire blew through the Waimapu Estuary like a freight train and was fuelled by the relatively strong wind,” says Angela. “Birds were flying in all directions. The sky was a dirty yellow brown with ash flying.

“Back in 2006 on October 6 the estuary burned down. It burned half of my property, so I knew what was coming.”

She climbed up onto the roof of her house so she could get a better idea of where the fire was heading but found the swirling smoke difficult to see through. 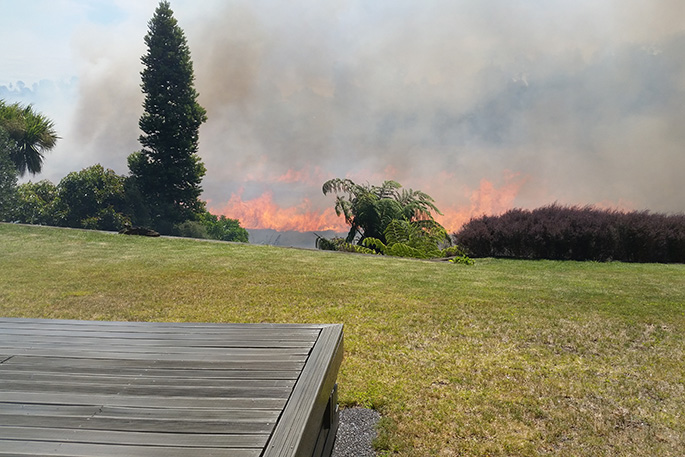 “The place was being covered in ash. I yelled out to the neighbours to clear the leaves off their roofs. I could tell it was about four houses away,” says Angela, who prefers to keep her family name anonymous.

She needed to get a better idea of where the fire was heading so jumped down, got on her mountain bike and sped through the estuary. 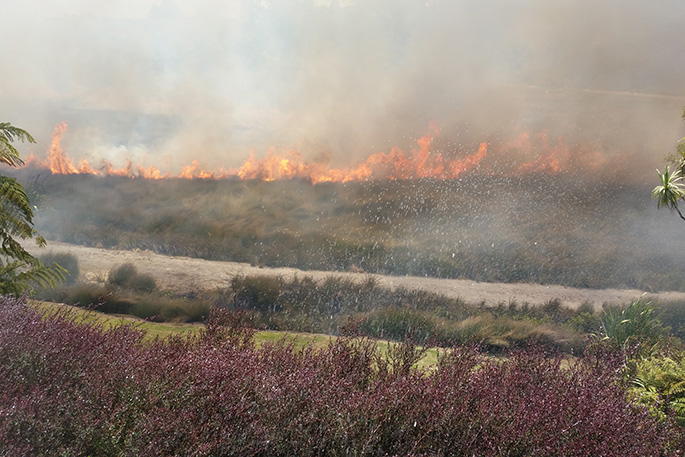 “When I got to the front of the fire there were people just standing there and looking. No one was doing anything.”

At that stage the fire fighters were already at work behind the fire, which Angela says was quickly moving.

“What helped saved us was that the wind was moving parallel to our houses, through the estuary.

“I told neighbours to go and get their hoses. I could see that the wind was coming in a direct line through the estuary. I knew that all it was going to take was a wind change and all that ash and embers would have been over our houses and triggering more fires.” 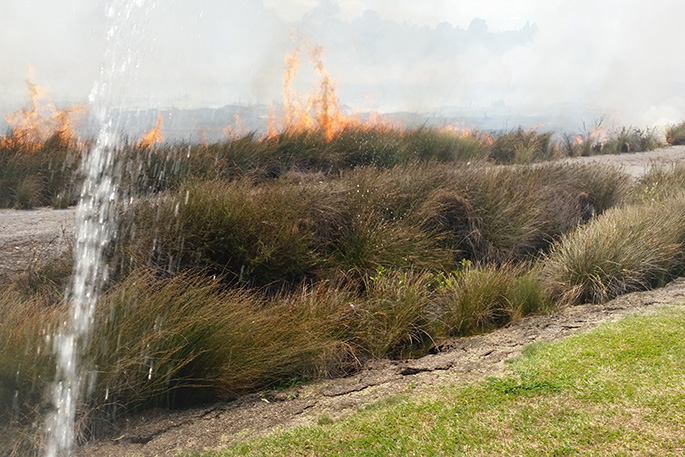 The fire came close to homes, with residents ready with their hoses

Later that day, she says a fire fighter told her she was correct – “that it’s the ash and embers that gets picked up in the wind that spreads the fire everywhere and triggers fires - not the fire itself. It’s what gets carried in the wind.”

As soon as she had told everyone near the fire to get their hoses out she went straight back to her own property and started hosing her house down.

“I looked across and saw that neighbours had also come out with hoses at that point.” 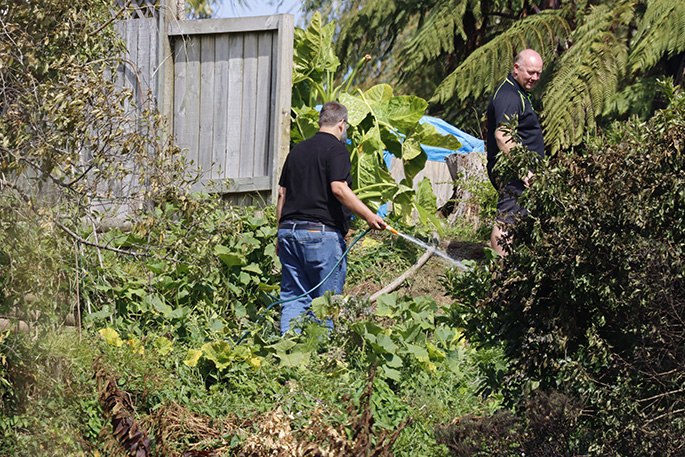 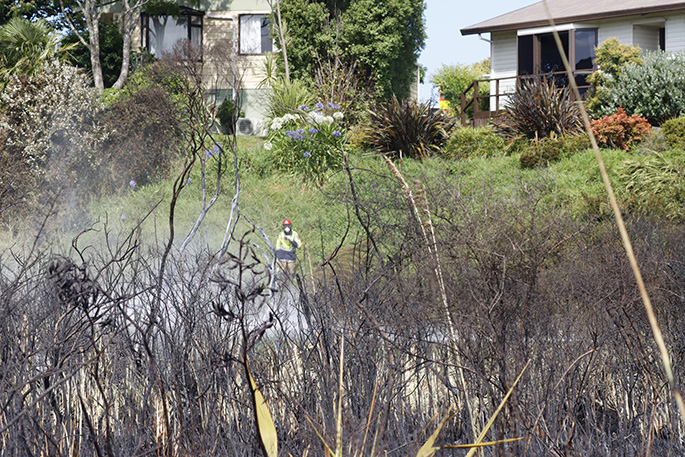 Fire fighters were called to the incident behind Windermere Dr at 1.40pm on Friday. Around 40 local fire fighters worked to put out the blaze with two more crews arriving from Okere Falls to assist them.  The significant fire spread to about 1 sq km in size, and was seen to be burning through scrub and salt water rushes.  A SunLive reporter in Haukore St observed ash falling onto the road.

“Salt water rushes are tall and stalky and burn extremely fast like hay,” says Angela. “They go up like Lucifer.” 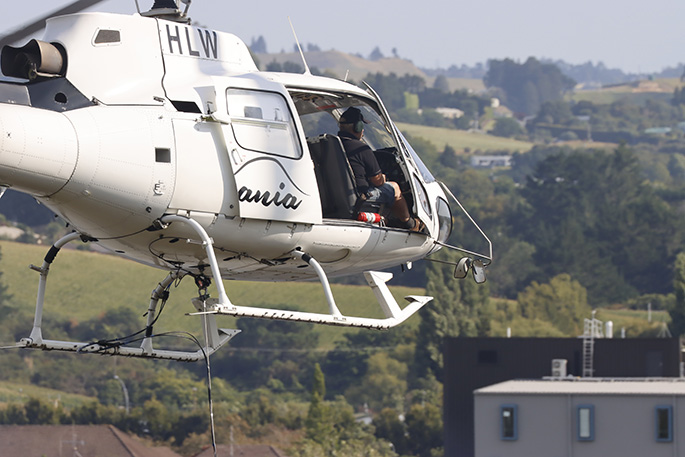 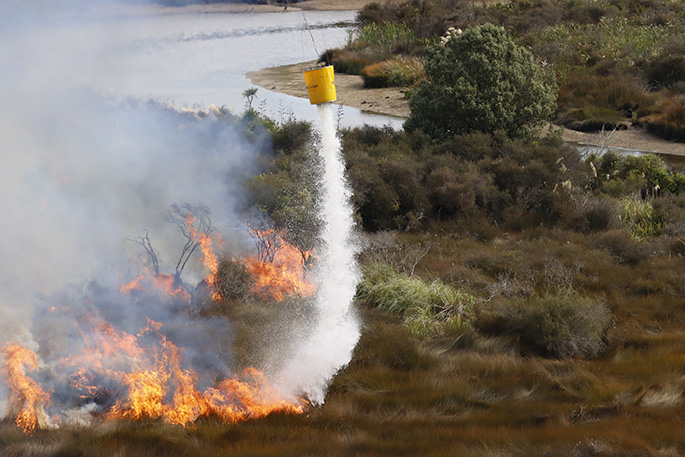 Two helicopters with monsoon buckets also helped to put out the blaze.

Police closed the road at the Lagoon Place roundabout and were turning cars away while the fire was being extinguished.

Angela watched from her home in College Place as the fire fighters and helicopter pilots continued to work. 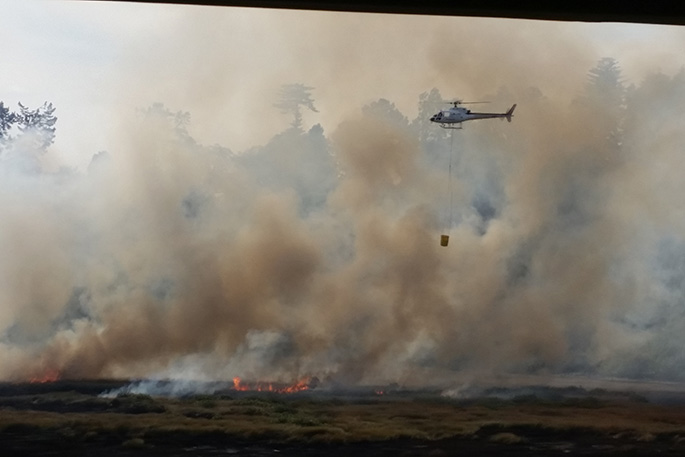 “I’ve lived here for almost 26 years, and the fire came very close to where our houses were,” says Angela.

“The helicopters completed their mission just prior to 8pm and the last of the firefighters on the ground dampening down the hot spots concluded as darkness fell - soon after 9pm.

“They said they would be back at first light to check for remaining hot spots.”

On Saturday morning Angela was full of praise for the fire fighters.

“There needs to be a very big ‘thank you’ for the efforts of the fire brigade and all the fire fighters that fought this fire yesterday.

“This could have been a very different fire if it was not for the help of the two helicopters. 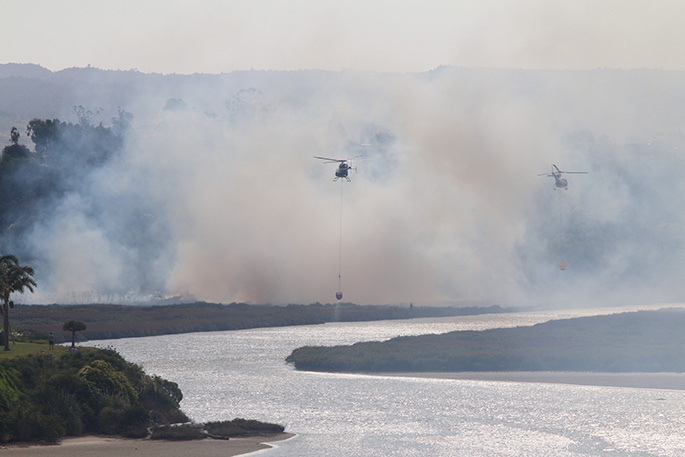 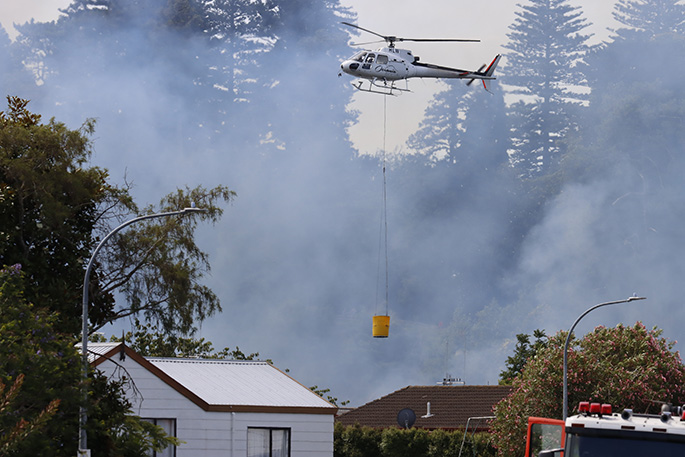 “It is important to note that the next stage of work for the heroes of the day is to clean all their equipment so they are ready for the next emergency. And I could see their equipment was going to take some cleaning.”

During the blaze, huge clouds of thick smoke were seen billowing into the air, and a reporter at the scene witnessed large pieces of ash falling.

Angela also points out that the reserve is home to wildlife.

“This is a protected wildlife estuary that is home to some endangered birds like the bittern. It is not or shall I say ‘was not’ scrub as has been reported,” says Angela. 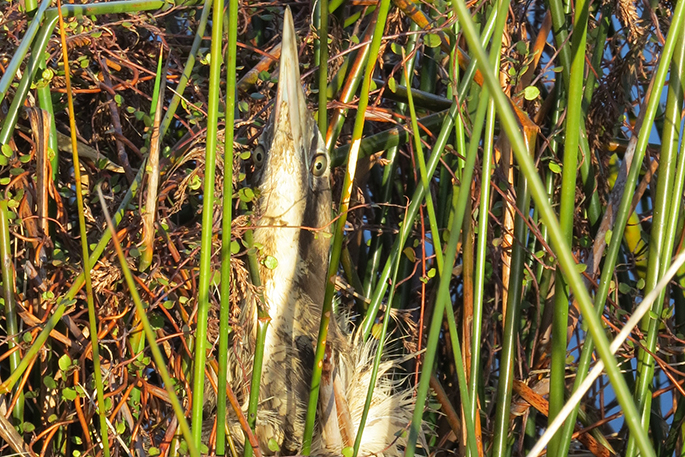 The matuku or Australasian bittern is a type of heron, and although shy, well-camouflaged and rarely seen, the birds have been found around the Waimapu Estuary.  It is a critically threatened species, with a population of less than 1000 in New Zealand.

In December 2017, two matuku chicks were brought into ARRC Wildlife Trust for care after being rescued from the Waimapu Estuary.

At the time Department of Conservation Ranger Karl McCarthy said they “basically just walked off the nest”, and were found in properties bordering the Waimapu Estuary. He wasn’t sure what had happened to cause them to do this, and thought that possibly the nest got predated on and the chicks had to go out and fend for themselves. 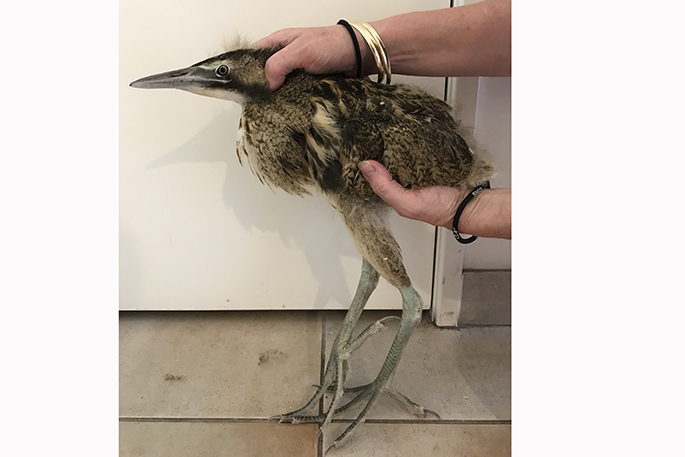 “And they end up wandering off to odd places. Or it could be that there’s not enough food in the estuary,” said Karl after the two chicks had been rescued. “Matuku use both wetland and estuary habitats. Oioi rushland habitats within estuaries seem to be a hot spots for nesting.”

Karl also said that a significant decline in matuku had been documented since the 1970s with loss of habitat being considered a major contributor.

“In NZ we’ve drained 90 per cent of our wetlands. That’s the habitat they’re dependent on.” 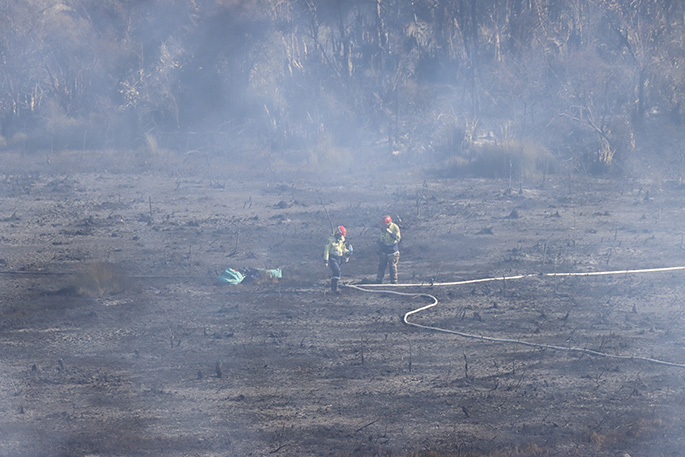 “Before yesterday’s fire happened, I used to see them put their heads up above the salt water rushes,” says Angela. “The salt water rushes have all been burned down. There’s probably less than a third of the estuary left that is unburned but 20 per cent of that is mangroves.

“There’s nothing left of where the fire came through. It’s not enough for bird life to survive. It’s devastating for the bittern that was in there, if it’s still there.”

Matuku are important to Maori. They appear in language as part of legends, stories, early pictures and metaphor and there are numerous place names referring to them. When Europeans arrived they were abundant, but now it is rare to see more than one at a time. The Australasian bittern are also found in Australia and New Caledonia, but populations there have declined dramatically and they are now classed globally as endangered.

The Waimapu Estuary is significant to Ngati Ruahine. The reserve links the harbour with the Waimapu Stream and contains a high quality example of a freshwater wetland. It also contains the best example of coprosma propinqua – also known as mingimingi - shrub land in the Tauranga harbour.  Mingimingi is a small-leaved shrub or tree which grows to three to six metres high. It has divaricating branches, and is common in swampy forest, scrub, along stream banks and in stony places. 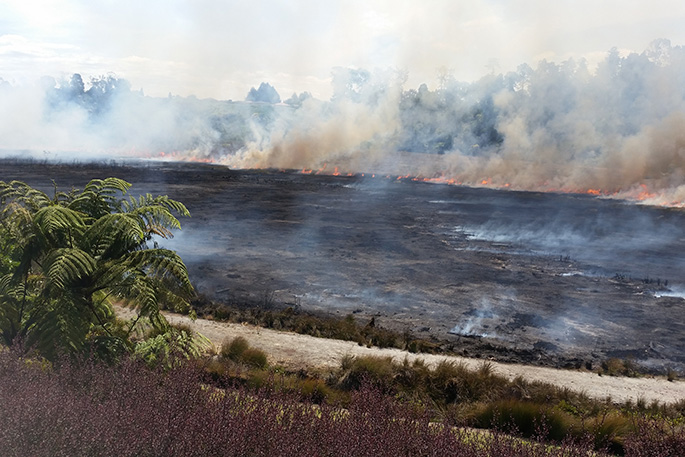 View of Waimapu Estuary on fire, from Angela's property

“Ninety percent of what burned was the salt water rushes,” says Angela. “Some of them will regenerate but unfortunately the ever increasing mangroves are more dominant.”

She believes the mangroves will now take over.

“As the high tides fill the burnt estuary the mangrove seeds will sweep in and more and more of the salt water rushes will be overrun by mangroves and weeds.”

“In 2006 one third of it burned took five years to regenerate. This time three quarters of it has burned, massively more. If it wasn’t for the helicopters it would have been much different. I think the possibility of it going into Yatton Park was very high.” 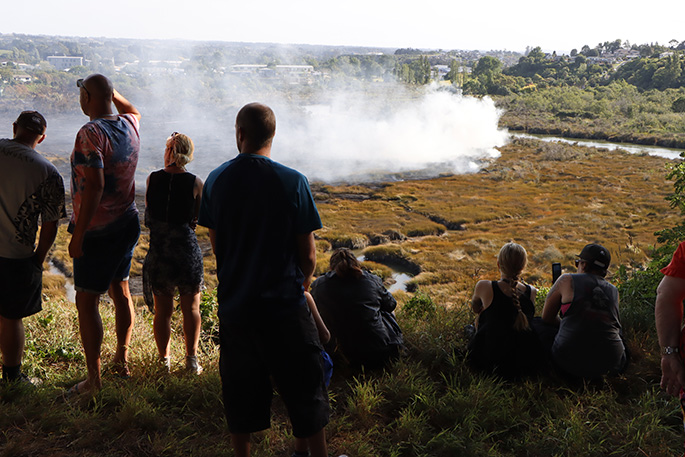 Whoever instigated the fire needs to be brought to account!