Celebrating Chinese culture in the Bay

Chinese New Year will be celebrated at Tauranga Historic Village on January 25, and the Chinese Lantern Festival at Te Puke on February 8. Photos: Rosalie Liddle Crawford

Stepping on to the village green at Tauranga’s Historic Village last week, I turned to find Wentao Zhang swirling past me, holding aloft a large golden ball spinning on top of a pole he was carrying.

Following him and well above my head, a long colourful dragon was swerving and weaving as it chased the ball. A red lion also leaped past me, twisting below the mythical creature. 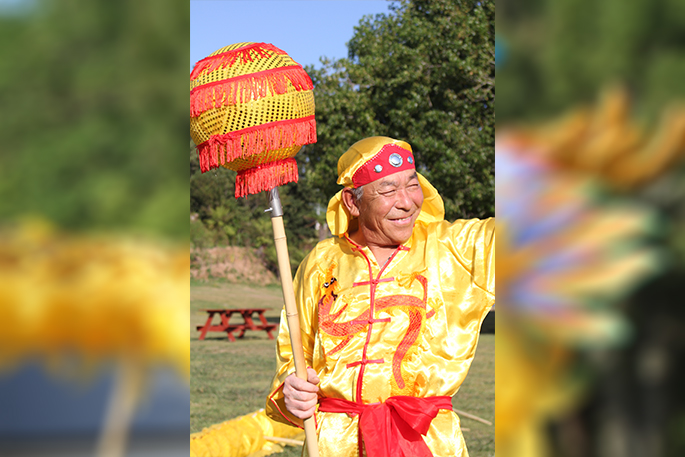 Wentao’s wife Suhua Yang was directing the dragon’s nine dancers, all fluidly moving to the drumming and music, as they wrapped the dragon body into a giant coil to try and trap the ball. In the middle Wentao was beaming, his face lit up in a broad smile of delight.

This was just the dress rehearsal. I can’t wait for the actual event on January 25. This is the first time that the Chinese New Year is going to be celebrated in Tauranga, followed two weeks later by the Te Puke Chinese Lantern Festival on February 8 at Jubilee Park. 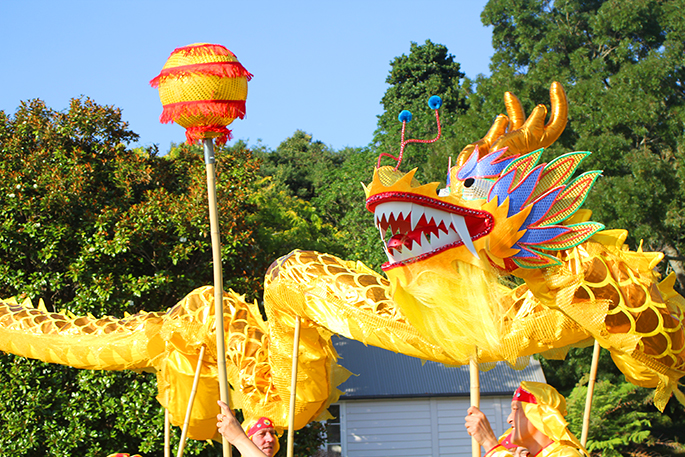 Wentao and Suhua arrived in NZ about five years ago, and Wentao secured his permanent visa last year. They both love it here. Their daughter Tina Zhang is president of the NZ China Friendship Society Tauranga, which has been organising popular events that showcase Chinese culture and arts.

Their Mid Autumn Festival in September 2019 featured Beijing Opera, Chinese instruments, kung fu and traditional dances. Prior to that, a Chinese Friendship Celebration was held in Te Puke in August with performances, providing an opportunity to see the art of making Chinese tea, demonstration Tai chi and a traditional Chinese fashion show. 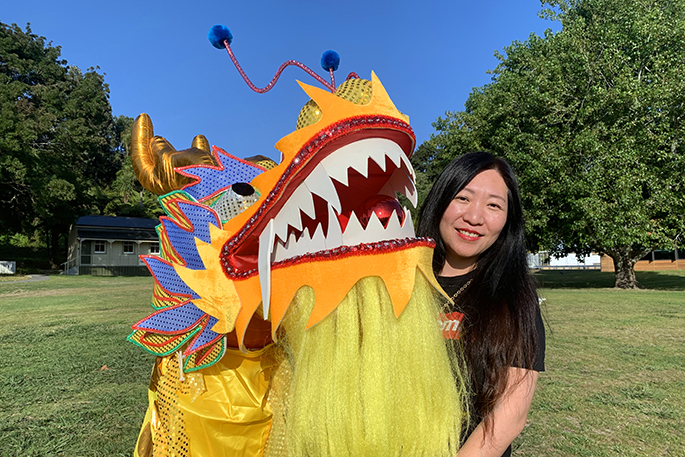 Along with the Mid Autumn Festival, two of the other most popular festivals held in China are the Chinese New Year and the Lantern Festival.

“Last year when I was talking with the Tauranga City Council Community Development advisor Haidee Kalirai, she asked me why we don’t have a Chinese New Year celebration,” says Tina. “The Chinese population has increased here so it would be good to let people know more about our culture.” 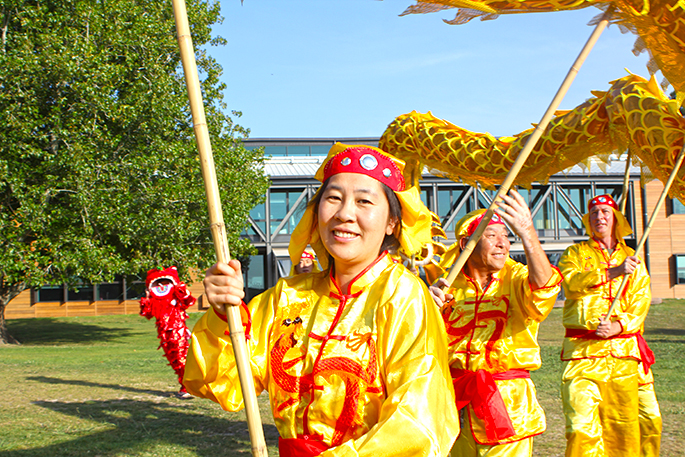 It is unclear when exactly the celebration of the New Year began in China. It is said to have originated during the Shang Dynasty of 1766 BC - 1122 BC.

The lion and dragon have a long history in Chinese culture.

“Chinese people like to say we are dragon people,” says Tina. “So that’s why at every Chinese New Year we have the dragon dance and the lion dance.”

She imported the dragon costume from China. 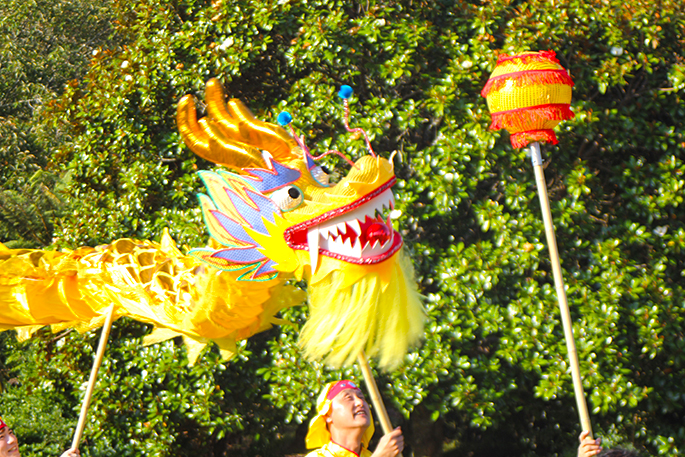 “Normally we would have a longer dragon. You would usually have 11 or 20 people - we have nine.

The dragon wants to catch the ball, so he always chases it.”

The lion is a significant part of the dance.

“When people in China have a celebration for New Year or the Mid Autumn Festival they always have a lion dance.” 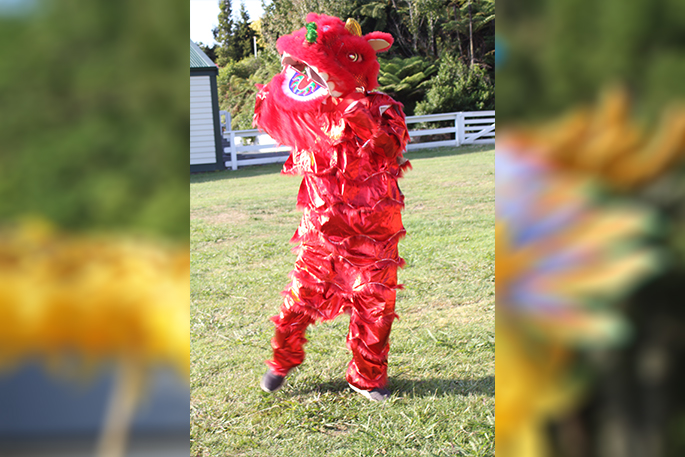 Tina has lived in NZ for about 12 years, originally coming from her home city of Shen Yang in China to study here when she was about 20 years. She is now teaching the Chinese language and managing the Tauranga Chinese Language School in Bethlehem. Both Kiwi and Chinese children attend the school, and it’s open to anyone who wants to learn the language.

The Chinese New Year Festival on January 25 runs from 5pm – 9pm, beginning with a village street event featuring traditional Chinese food. The lion and dragon dance will be performed at 6pm after which Tauranga Mayor Tenby Powell will speak. At the Te Puke event on February 8 which also runs from 5pm – 9pm, Western Bay of Plenty Mayor Garry Webber will speak at 8pm. Following both mayoral speeches, 100 doves will be released. 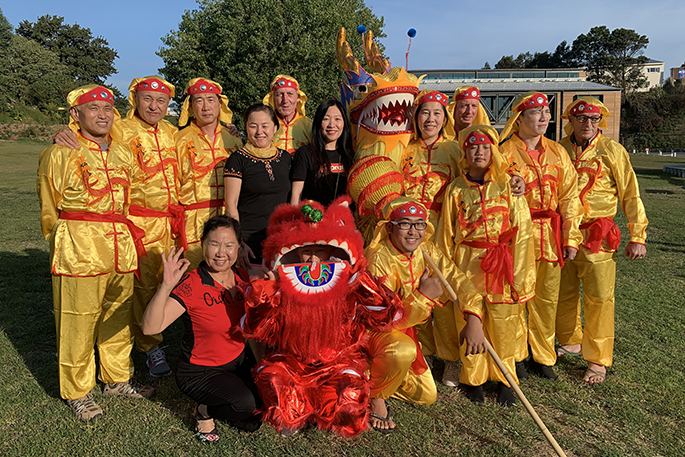 At the Tauranga Historic Village event, there will be also be a performance at one of the street corners “by a young lady, a single lady”, says Tina.

“She will throw a ball from the upstairs balcony into the street below. Chinese tradition is that whichever single man catches the ball will marry the lady.

“In China a long time ago, maybe 1000 years or 5000 years ago, if the girl wanted marriage with a man she would throw the ball to him.”

There will be no marriage here.

“Just a game,” says Tina. “We’d like our local people to know our history, and part of our culture.”

I ask her if there will be lots of young men ready to catch it. 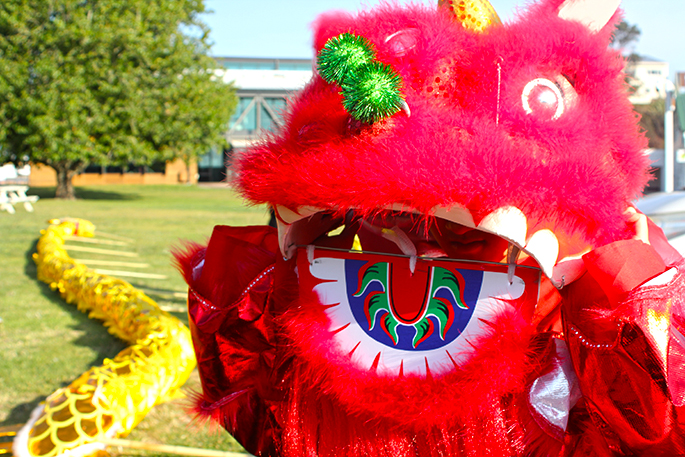 There will also be plenty of children’s activities and a calligraphy demonstration.

Tina thinks there are about 2000-3000 Chinese living in the Tauranga region.

The Tauranga Chinese New Year Festival will be held on January 25 from 5pm – 9pm at the Tauranga Historic Village. The Dragon and Lion Dance is at 6pm and a cultural performance from 8pm – 9pm.

The Chinese Lantern Festival which also includes the Dragon and Lion Dance will be held on February 8 from 5pm – 9pm at Jubilee Park, Te Puke. Entry to both events is free, everyone is welcome and the food and games will be cash only. 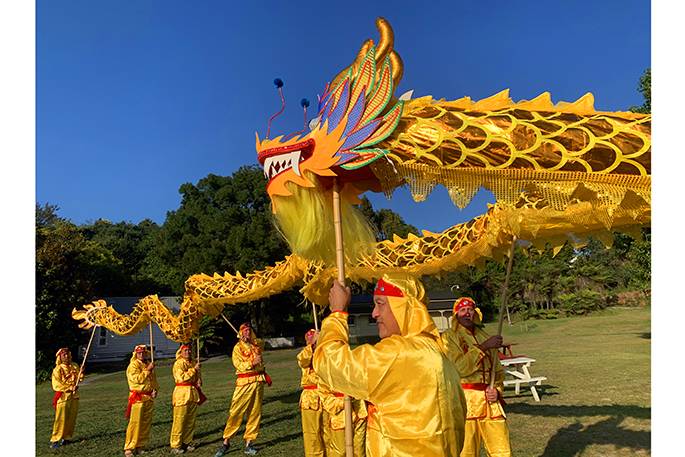