Tauranga’s mayor is calling the government to take action on a “turf war” between gangs in the Western Bay of Plenty.

Mayor Tenby Powell says the shootings in Te Puke and Hairini and an alleged arson at a business in Greerton, are a part of two gangs fighting for distribution of the drug trade.

Tenby wants to speak with the Police Minister Stuart Nash about the best way to deal with the issues and if the area needs increased police numbers while gang activity is high.

“It's only a matter of time before the collateral damage spills over from property, in the case of Greerton, to people in the Tauranga Moana area.

“I've been contacted by many people who, if I can paraphrase it, really are scared.”

“I've just observed an increase in activity to the point where over a period across 72 hours it got to what I would call from a military perspective, operational tempo, which was alarmingly high.”

“Gangs shooting at each other on No. 1 and 2 roads in Te Puke and now it's ended up in Greerton with this barbershop being burnt down, which is alleged to be arson.

“There's no doubt in my mind that we're a small place, to get a slice of the action in terms of drugs, distribution, they're going to have to find a way of doing that and it would appear that at the moment it's causing an awful lot of activity.

“The money to be made from drugs distribution is just astronomical, and the gangs are starting to fight with each other in what is effectively a turf war.” 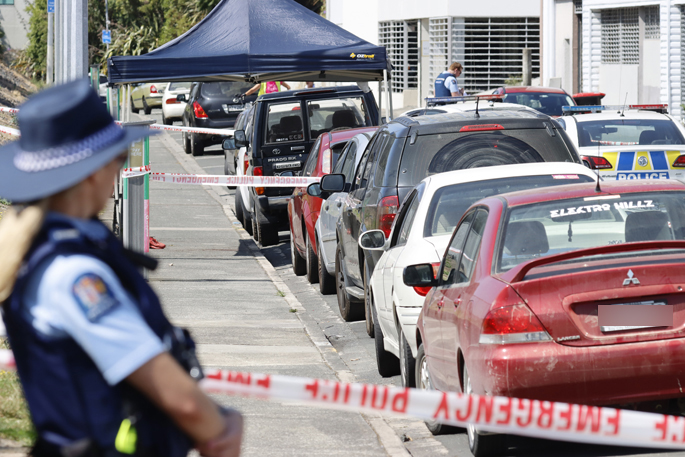 The scene of the stabbing on The Strand, Tauranga. Image: Daniel Hines/SunLive

Neither Tenby nor the police would confirm which gangs are involved but it’s believed to involve the Mongrel Mob and Mongol Nation.

The incidents began on January 25, with the smashing of windows at Greerton business Bladed N Faded barber and tattoo studio, the same business has been gutted by a suspicious fire on January 27.

A stabbing occurred on January 26 where two men are alleged to have stabbed a man on The Strand.

During one of the defendants’ first court appearance Judge Michael Crosbie said he had been told by police the pair are allegedly prospecting for the Mongol gang.

On January 28 shots were fired in Hairini, police responded to a firearms incident just after midnight.

Later that day, police attended an incident on No.2 Road, Te Puke, where shots were reportedly fired and roads were cordoned off.

“The police are doing an absolutely stunning job, amidst trying and challenging circumstances,” Tenby says.

“We need government help that's the bottom line. Now police are doing a stunning job. I don't know this for sure, but I wonder if they’re resourced to the level to cope with this level of operational tempo and I wonder if we don't need an immediate surge to assist.

“If the level of activity gang activity continues then I will be asking the [Police] Minister for a surge in police numbers and the police that are trained in dealing with armed conflicts.

“I would welcome a conversation because I'd like to sit down with Stuart and Clifford Paxton and say let's understand together the lay of the land and all the issues that we need to contend with.”

“We are investigating each of these incidents separately, as well as any possible links between them, and any potential gang involvement.

“We know our communities are understandably concerned about recent events.

“We continue to maintain a visible presence in those communities where there are heightened concerns, and will continue to assess this on a regular basis.” 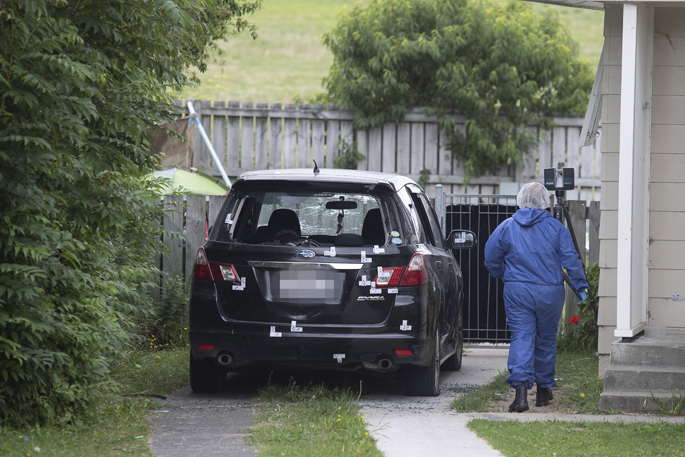 Investigators at the scene of the Hairini shooting. Image: John Borren/SunLive.

Tenby says one way to curb the violence is to reduce the amount methamphetamine coming into New Zealand.

“It's more than gangs, it's around the distribution of meth, it's drugs. That's the issue and if the supply can be taken away, I truly believe that we'll make good in roads into this distribution violence abating.

“From my perspective, the solution is to cut the head off the monster, which is to stem the supply of meth into the country.

“It's not easy because it's very resource intensive. It's going to take a lot of people to do that and it needs good intelligence gathering and it's expensive as a consequence of that. But as I see it, I think that cost would pale into insignificance as compared to the damage being done to society.”

agree with i told you,

Mr Mayor mind your OWN BUSINESS, Get your (GANG OF THUGS) 650 of them that(work)that dont when working at TCC get up them and make them work and make peoples life hell when wanting things done,you are suppose to lead BUT you are doing as you are told and DONT WANT to upset them,my gosh all the Head JACKBOOTS that work there and can not get to talk to anyone as they are always in meetings,dont get me started on bayfair the roundabout is huge watch this space for accidents ,this morning it was backed up to Sandhurst drive,should be NO right turn from girven road and that would keep everything moving and dont have to STOP,Girven rd to turn left and turn back at baypark and come back its simple, well Sunlive lots of comments now keep up this, Thankyou 10-4 out.phew.

If the Mayor want’s Politicians help perhaps he should ask Simon Bridges to go and talk to the gangs he seems to know how much their membership records have increased quoting 1400 new members.How he has access to their membership figures increase escapes me.Police numbers have increased in the Bay of Plenty recently and we have had many arrests in the drug area lately.The Police are doing a great job.Do not knock them Mr Mayor.Also the Police here are trained in dealing with armed conflicts.

Who does our Mayor think he is? He has no right to demand the Police get their act together when we know they are doing their best and don’t need the Mayor running them down.Please let the Police do the job without interference.

The order of events in this case doesn’t matter. The fact is we don’t want gangs terrorising our streets. The examples given,I am sure are just the tip of the iceberg. Yes rightfully or wrongfully connections are going to be made while investigations are underway, that’s a fluid part of the process. If it’s here-say garbage why are bothering reading it and following it. In your last by the way, you just called yourself a fool.

Recently there was a running brawl on Coronation Pier at the Mount between two gang affiliated groups of youths. It was in front of locals and cruise ship passengers and was disgraceful with its fist fights and foul language from girls and boys alike. Also the gang called Greasy Dogs regularly ride their bikes through the Mount at speed and make a deafening noise scaring the elderly and the young as well as our cruise ship visitors . I say get out of the Mount. Rabble like them are ruining the peace and tranquillity of this beautiful spot in our city.

I’ve been following these stories since they started. According to you sunlive, the barber shop was burned first then the shooting at hirini then the sound of gun shots up number 2 rd. Let’s not forget how you connected the stabbing down the strand. The media is making up all these dumb stories getting Joe public to believe the garbage you feed them. Police want these gangs to destroy each other because it makes their job easier. That is why they are making up these heresay stories not based on fact. Any fool can read between your pages of fiction.